Centrifugal casting: more than a necessity

Centrifugal casting: more than a necessity

Gibson Centri-Tech is a world leader in the production of centrifugal casting equipment. Martin Gibson, managing director of the company, discusses the process and its best applications. 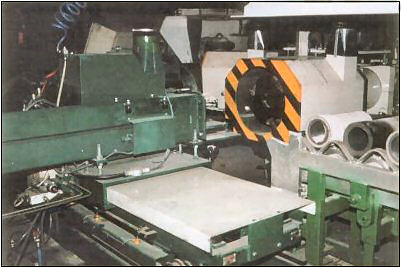 It has long been known that good castings are free from porosity, mainly caused by shrinkage and gas entrapment. By its nature the centrifugal casting process can substantially reduce and in most cases eliminate these defects.
The benefits of the process is that the casting is subject to force during solidification causing low density constituents to migrate into the bore of the casting. Directional solidification as a result of the progressive cooling of the casting from the outside surface towards the bore also contributes to the casting quality.

The main applications for the centrifugal process are tubular or ring shaped castings enabling production of the casting to take place without a core. If the casting shape is suitable the benefits can be significant, giving advantages in:
• Quality
• Price
• Delivery

In some cases where products are difficult to produce by other means the process is a necessity particularly for certain special alloy castings because the producer is compelled to select the process, as there is no other realistic alternative.

Brief description
Metal moulds (dies), or purpose made sand moulds, are rotated around a vertical or horizontal axis with rotational speeds predetermined to induce centrifugal forces within sections of the casting of typically up to 200 times gravity.

A pre-weighed or volumetric measured amount of molten metal is poured into the rotating mould, usually by way of a pour spout, in order to control the pouring rate and deposition of metal onto the mould wall or, if shaped, into the required position to minimise turbulence.

After metal solidification, which can take a few seconds to several hours depending on the size and weight of the casting, the mould is stopped and accessed for the casting to be removed.
Mould/dies for producing cylindrical shapes are basically ring or tube shaped with end plates one end, possibly completely closed, with the other end made with a suitable orifice to allow the metal pour spout to enter the mould. Usually the end plate with the orifice is removed to permit casting removal, except where long tube castings are concerned. Where mechanical extraction is used, molten metal is poured through one end of the mould and the tubular castings are extracted from the other end.

Horizontal casting
Cylindrical castings are usually made on horizontal axis machines. Casting with a ratio of typically 1 diameter : 3 to 10 length are normally made on shaft machines and the castings are removed from the pouring end.

Tubular castings with ratio 1 diameter: 10 to 40 length or longer are made on roller mould supported machines. For convenience castings are poured via a pouring horn at one end and castings are usually extracted from the mould via the opposite end.

The most prolific application of centrifugal castings is for ductile pipes. These are produced on horizontal machines; purpose designed to lay the molten metal onto the mould surface in a helical fashion after which it is rapidly cooled. This system is commonly referred to as the DeLauvaud process.

Molten white metal is poured by way of a suitable spout that passes through one of the rotating shafts. This method of lining white metal bearings is used worldwide.

Vertical Casting
Disc or bush type castings can be made on horizontal axis machines of the shaft type, but where castings of weights in excess of 500kg the vertical axis machine is often preferred for mould and casting handling and safety.

With vertical machines casting sizes range typically from 50mm up to 4m for general engineering requirements and are produced in a wide range of ferrous and non ferrous alloys.
Small items such as jewellery are also made on machines employing the vertical axis, which enables easy access and mould handling. Moulds are made of metal and where low melting point alloys are to be cast, rubber moulds are used also.

An exception to the ‘disc/bush vertical, and tube horizontal rule’ is the centrifugal casting of rolling mill rolls. In most cases the vertical axis machine is used.
The mould used for making the roll casting is a composite employing a centre chill section for the barrel rolling surface and two sand/refractory lined flask sections for the neck pieces, referred to as the bottom and top neck boxes.

The bottom neck box is moulded with a sealed end; the top neck box is moulded with a suitable orifice to allow pouring spout entry.
Roll castings made by the centrifugal method are nearly always double poured. Initial pour is of high quality, complex alloy metals to provide the necessary hardness and rolling mill life. The follow up (second pour) is usually a basic good strength alloy. 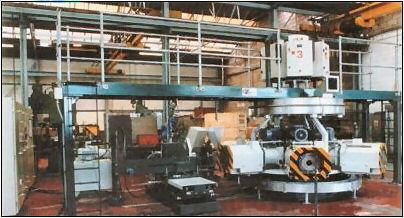 Recent improvements
Controlling process variables is important from a quality control aspect on most industrial processes. Centrifugal casting is no exception. The ability to monitor and control the process at the critical points of pouring and cooling during the solidification phase brings further improvements. Certain types of casting benefit enormously from the process, particularly when combined with accurately controlled metal introduction temperature, non-turbulent pouring and controlled cooling rates.

Cooling systems have been enhanced by better controls over the type and application of the mould coating combined with mould temperature control.

Gibson Centri-Tech Ltd is able to offer the facility to apply new control and instrumentation technology to the centrifugal casting process. This enables the user to exploit the process to its maximum advantage. In many cases Gibson will engineer custom solutions to suit the buyer’s specific requirements expanding on the users existing facilities and know how.

Environmental impact
Excluding metallurgical fumes the process in itself has little impact on the environment if permanent moulds are used, as generally only a small amount of residue from the mould coating needs to be contained to maintain dust levels below acceptable limits.

New applications
Whilst the centrifugal process is mainly applied to cylindrically shaped castings the process is used to advantage with shaped and intricate components for metallurgical or production reasons.
This area has seen growth in recent years where castings need to be of high integrity typically for the petrochemical and aeronautic industries.

The process is also producing special structural tubes where specification or quantities make conventional tube production not viable. Many applications exist that could be applied to the centrifugal process.

In western and other developed countries the pressure has been to reduce manning levels and improve automation. Many centrifugal foundries have managed to meet this demand and have remained in a strong position through difficult times by staying at the forefront in the foundry industry. This has been achieved by investment and taking on high technology projects and products.